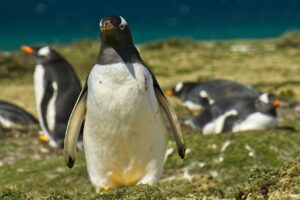 In February 2023 near the end of South America’s summer season, Sunset Vacations & Travel Planning will be hosting a group cruise to the end of the world: Santiago, Chile around the southern tip of the continent to Buenos Aires, Argentina. This will take place on board the luxurious mid-sized and spacious ship, Holland America’s Oosterdam. A few weeks ago we featured Part 1 highlighting our optional 2-day pre-cruise adventure in Santiago as well as sites on the Pacific side of the journey. In this Part 2 we explore the Atlantic side of our cruise itinerary including stops in the Falkland Islands, Uruguay, and Argentina’s famous national parks before ending in cosmopolitan Buenos Aires. Here are some of the highlights.

Edge of the World. Day 7 includes sailing through Chile’s Cockburn Channel, still on the Pacific side as we make our way toward the famous and historically dreaded Cape Horn. Make sure to spend time taking in the many fjords, waterfalls, and glaciers. If you’re lucky you may get to see and hear large pieces of ice crash into the ocean from one of these glaciers, a sure sign of your proximity to Antarctica. On both sides of the channel is Chile’s Alberto de Agostini National Park, a beautiful but intentionally hard-to-reach paradise. Later in the day, the ship will make its way into wildlife-rich Beagle Channel, which will bring you finally, if temporarily, into Argentina.

Ushuaia, Argentina is just 680 miles from the Antarctic Peninsula and bills itself as the world southernmost city. With 75,000 residents the town itself has museums and as well as restaurants serving the region’s famous king crab, all beneath nearby towering mountains and the nearby Tierra del Fuego national park. Here you can take a tour of nearby sites on the world’s southernmost railway to see the park, stopping along the way for waterfalls, glaciers, forests, mountains and rivers. Other excursions include hiking, kayaking, king crab fishing in partnership with Food & Wine Magazine, and even a catamaran tour exploring the Beagle Channel and surrounding landscape.

After Ushuaia, we’ll sail around the most notorious ocean passage in the world, Cape Horn. Historically the only way to sail between the Atlantic and Pacific prior to the Panama Canal, take in what it must have felt for sailors of past generations making their way around this isolated part of the world where the two oceans converge. Fortunately, we’ll be able to cross between the seas with luxury and comfort.

Next stop is the Falkland Islands, a British overseas territory home to just a few thousand people. Stanley is the capital city where you can sense the British influence through its pubs and red telephone booths. Wildlife viewing is the real draw here, though, with the area’s many penguin colonies which can be accessed by guided driving tour, hiking excursions, and even 4×4 drives to the remotest parts of the islands.

After two days at sea experiencing the ship’s many features including shows, pools, upscale restaurants, and the spa, arrive refreshed in Uruguay’s capital city of Montevideo. The palm-lined streets will come as a surprise after several days in the much cooler climates. Experience this cosmopolitan and historic city through a guided city tour, take a wine excursion, and learn the tango dance at Baar Fun Fun, an iconic destination known for more than 80 years of tango history.

Our journey ends in Buenos Aires, Argentina, known as the birthplace of the tango. Buenos Aires is very walkable with shows, museums, and upscale restaurants. For some of the best meat anywhere, take a tour of a nearby ranch featuring empanadas and a barbeque lunch.

If you’re inspired to book this group vacation with us, contact us soon as space is limited! We are just a phone call or email away at 817-442-5398 or SunsetVacationsTravel.com/contact

For Part 1 highlights of our planned group trip to South America, click here.

← Did the airline lose your luggage? What to do when it happens and how to reduce your risk Need to renew your passport? You may be able to accomplish online →