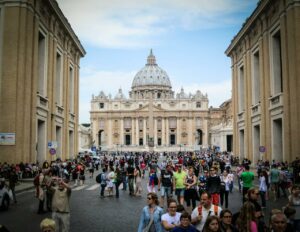 It’s an unfortunate fact especially in tourist-heavy areas of Europe, that scammers take advantage of even the savviest travelers. Some are virtual pros at extracting money and passports, which can spoil a trip in an instant. Most scams have a common purpose – to distract, confuse, or disorient so you won’t notice you’re a targeted victim. Here are the most common scams to be aware of. Once you understand how each scam unfolds, you can better prepare yourself for these and similar setups. While tourist-heavy areas of Europe are popular for a reason and shouldn’t be avoided, some vigilance and common sense will go a long way to make sure you don’t fall prey to a scam artist.

The baby toss: In this scenario, shoppers carrying a lot of bags or passengers on public transit will be approached by a stranger and asked to hold their baby. In some cases the baby will be tossed at you, hoping you’ll drop your belongings. In the midst of the confusion, pickpockets will snag your wallet or passport, or accomplices will grab your shopping bags and run. You’ll soon find the “baby” isn’t real.

Street performances/games: In heavily touristed areas, you’re likely to encounter street performers or people asking you to bet on a certain game. These may be harmless but commonly there are scammers roaming the crowd looking for victims to pickpocket. If you drop a few coins into the basket, these folks track exactly where your wallet is, making it easy to grab it during a moment of distraction. To prevent this, only stop briefly at these performances and avoid taking out your wallet or purse for any reason, and be mindful of where your possessions are at all times.

Fake police: Beware of anyone acting like a police officer in Europe asking to search your purse for contraband. Counterfeit bills are a favorite by scammers. Many visitors, unaware of local laws, may allow this resulting in them running away with your valuable possessions. Know that in most European countries there are laws protecting citizens and visitors of warrantless searches. If in doubt, ask them to conduct the search at the nearest police station which is the last place a scam artist would want to be.

Pile up: At the bottom of an escalator at a train station or mall, someone will drop their bags or pretend to trip causing a pile up behind them, allowing thieves to take wallets or bags from those caught in the commotion. Certain people are particularly targeted if they’ve been spotted getting cash out of an ATM or making an expensive purchase. The key here is to have an awareness of where your belongings are even in confusing situations, and also only get cash at an ATM inside a bank. Many high-end stores will also deliver your purchases directly to your hotel room.

Language learner: A seemingly friendly individual will approach you asking if he can practice some English with you. He reads from a text and then hands it to you asking if you can help pronounce a word or sentence. During the handoff and while you’re figuring out what he wants you to read, someone else lifts your wallet. In highly touristed areas if approached by someone asking for a favor, or perhaps wanting to offer you a free “gift” it’s best to politely but firmly say no and keep moving.

There are many variations of these scenarios that scam artists use, but the point to distract, disorient, and confuse is the same through all. When traveling through crowded areas if something feels off, it probably is. Use your instincts and always have awareness of where your valuables are. If the weather is cooler and you’re able to wear a jacket, it also helps to keep your valuables within an interior pocket. Finally if you fall prey to a scammer, immediately report it to a nearby police station. If your passport is one of the items stolen you need to also report to the nearest U.S. embassy for assistance.

Scams are unfortunately becoming prevalent everywhere, and scam artists more sophisticated for even the best-prepared travelers. By knowing some of the situations they use, you’ll be better prepared to avoid a real trip spoiler. Do you have other scenarios you’ve encountered or tips to avoid falling victim? Leave us a comment at Facebook.com/SVandTP

← Skip the security and immigration lines with these 5 strategies South American cruise 2023: Highlights of the trip (Part 1) →