A brief history of the Panama Canal by Tom Koranek 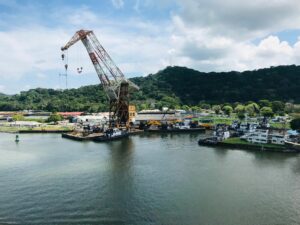 It is widely accepted that the Panama Canal is one of the seven engineering marvels of the world. To view in person, the canal is an inspiring wonder.

Denise and I just completed the transit of the new locks. It is truly awe-inspiring!  Tugboats gently guided our cruise ship through the locks as they raised and lowered the ship through 3 locks on each end of the canal. The slow cruise through Gatun Lake in the middle, amid raucous wildlife noises from the rainforest was exciting!  Viewing this masterpiece in person transports one back to the time of construction and the challenges and dangers the engineers and workers faced.

Scotland and England flirted with the idea of a canal across the isthmus in the early 1800’s.  With the discovery of gold in California, the U.S. built a railroad across the isthmus. The French made a serious attempt in 1881 that ended in bankruptcy and failure due to extreme mortality rates from malaria and yellow fever as well as accidents primarily from landslides. They wanted a sea level canal but had deferred handling the 15 ft Pacific tides and the 3 ft Caribbean tides for later! Could have been an amusement park ride from the west to the east!

In 1903 the U.S. under Teddy Roosevelt then pursued a treaty with Colombia seeking permission to resume the dig. Congress approved but Colombia did not ratify. Then the U.S. encouraged Panama rebels to revolt.  With U.S. troop support, the rebels succeeded; the country was recognized by the U.S. and a new treaty signed. That was the “big stick” part of “speak softly” diplomacy.  The original treaty gave the U.S. perpetual administrative rights.  However, in 1977, “No Stick President Jimmy Carter”, agreed to give canal control back to Panama in 20 years which was finalized in 1999.

Teddy Roosevelt in 1904 appointed U.S. Army engineers Gorgas, Stevens and Dr. Walter Reed to the project. They spent the first 18 months treating mosquitos with larvicide and oil, installing screens and mosquito nets. Due to these precautions, worker deaths from disease and accidents were 5500 vs. the estimated 30,000 in the earlier French attempt.

In summary, 250 ft of height and 7 3/4 miles of length were cut off the mountains along the Pacific permitting access to Gatun Lake formed by a long dam constructed on the east end. This allowed the construction of 3 locks on both sides raising ships 85 ft to Lake Gatun.  Simple, right? No. It required the removal of some 47 million cubic yards of soil and rock.  Parts of Panama City especially the area of Balboa are built on that excavated material. Landslides were a constant problem encountered cutting through the mountain. Engineers were experienced building railroads through granite and other rock material; channel side walls remained stable. But this volcanic material would not hold together and had to be removed. The sides were then gradually terraced to prevent landslides during the rainy seasons.

The canal opened 2 years ahead of schedule in August of 1917 with President Woodrow Wilson giving the order by telegraph to flood the locks.

← What’s it like to cruise through the Panama Canal? Alaska cruises: Sailing during peak versus shoulder season →